Once again GAAP partnered with Empower and Central Toronto Community Health Centre to coordinate an event for Youth World AIDS Day!  There were several phases to this event, which took place on November 26th, 2013.

First, approximately 50 New College and Women and Gender Studies students gathered in the WGSI Lounge.  Here, students mingled and customized their own “sexy cupcakes,” featuring a full spectrum of genitalia!  Once everyone had settled, the U of T’s Sexual Education Centre gave an informative presentation about the various services that SEC provides on-campus.  They also supplied everyone with a sexy goodie bag, which included  condoms and lube packets. As a large group, we then proceeded to the Central Toronto Community Health Centre.  On the way, student’s were led on a Radical Sex-Ed. Tour:  as we walked down Spadina, we tied red balloons to poles and wrote messages about HIV/AIDS on the sidewalk in chalk.  We stopped by the Centre for Women and Trans People,  where we were given a tour of their facilities and told about their upcoming events.  Next we visited Come As You Are sex shop, where everyone was given a gift card that provided them with a discount on future purchases! 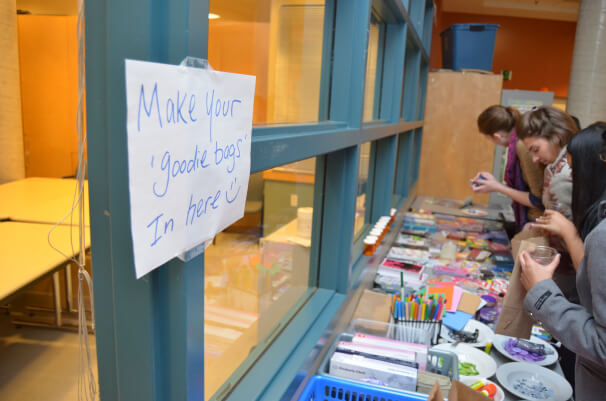 Upon reaching the Central Toronto Community Health Centre, we were welcomed by an additional group of 30 youth from the Centre’s Empower Project and an Elder affiliated with the Native Youth Sexual Health Network, who performed a Smudging ceremony.  Following this, the various groups of youth interacted over dinner, which included delicious samosas.  Once everyone’s stomachs were full, we then gathered around a projector for the night’s main feature:  the Digital Stories created by youth in the Empower Project.  Through a combination of art and commentary, ten youth told provocative, brave, and powerful stories about their experiences pertaining to physical, emotional, and sexual health.  For these youth, the showcasing of these stories seemed to be a cathartic experience; the audience was completely captivated during these presentations–one could hear a pin drop!

Prior to leaving, everyone was given the opportunity to make their own customized button, create poetry that responded to the night’s activities, and grab a plethora of sexual health resources that were available!  The night concluded with the conference’s organizing committee staging a flash mob to Olivia Newton-John’s “Let’s Get Physical.”