Late last November, U of T students and community youth joined the GAAP project and the Queen West Community Health Centre to raise awareness about World AIDS Day. Through a walking tour and film screening, the group explored a number of issues concerning the social determinants of health, with an emphasis on sexual health education and harm reduction.

Starting at New College with a presentation from the U of T Sexual Education Centre (S.E.C), students mixed and mingled while snacking on delicious condom-themed cupcakes.

From there, they walked to the Centre for Women and Trans People, a safe space for women and trans people to drop in on campus, and then on to YouthLink, an organization with several locations around the GTA that provide services and programming for street-involved youth. In each they received a tour of the Centres’ facilities and an overview of their services and programming.

The final destination of the night was the Queen West Community Health Centre, where we were joined by more community members to share a delicious dinner from Fabarnak, a restaurant located at the 519 Church Street Community Centre.

The night ended off with a film screening of the Empower Digital Stories—a series of short films produced by community youth in the Empower Project around the social determinants of sexual health—and a short documentary, Candlelight Vigil at the Russian Embassy, about the need for harm reduction programming for injection drug users. People shared stories, poems and knowledge about HIV/AIDS, as well as information about resources in the community. 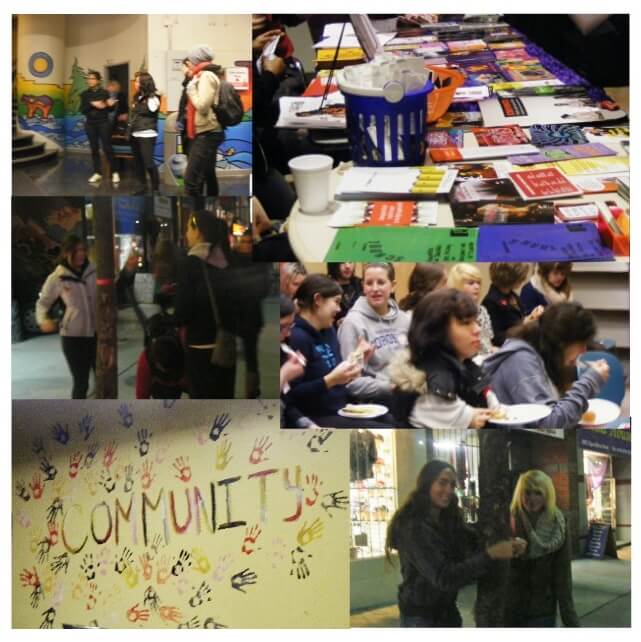 From top left, clockwise: Youth receive a tour of the Centre for Women and Trans People; The sexual health resources at Queen West Community Health Centre; Everyone enjoys dinner and screening of the Empower Digital Stories at Queen West; Tying a red ribbon in honour of World AIDS Day; a mural at YouthLink.

Source: This post was originally posted in the the New College newsletter.